This tutorial is a continuation of GitHub task automation with serverless actions.

Getting a serverless action to run is all well and good but what if you need to update it? In this tutorial, I cover the quickest way to set up basic CI/CD for OpenWhisk actions using as few dependencies as possible. We’ll use Travis CI, as it comes freely integrated with GitHub, and the IBM Cloud CLI, that’s it!

There’s one catch though, I have API keys in my serverless application. Wanting to keep things 12-factor(ish), I set these as environment variables. But how can I keep all the information in sync between my local workflow, IBM Cloud’s functions, OpenWhis, and Travis. Read on to find out now!

Here’s how it looks at a high level:

When the reader has completed this tutorial, they will understand how to:

This tutorial is split into a few parts:

From the IBM Cloud console, click the Manage option, choose the Access (IAM) option, and then the IBM Cloud API keys tab. Or, just go to https://cloud.ibm.com/iam/apikeys.

Create a new IBM Cloud API key, give it any name you’d like. 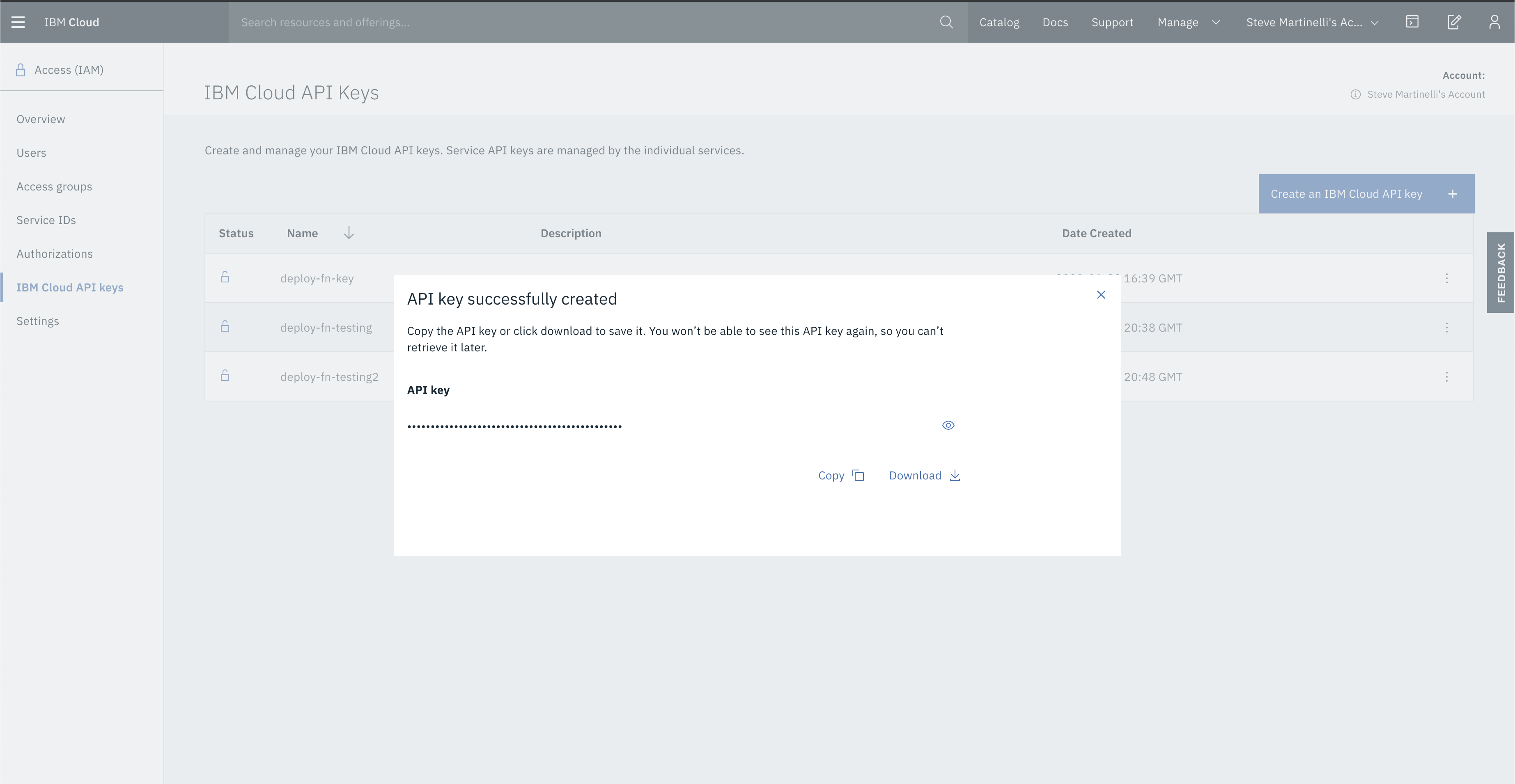 Click on the reveal icon to view the API key.

To test the full workflow, we need to host our code somewhere. Choose to create a new repo by going to https://github.com/new or fork my repo.

Once you have an empty repo, create the following files:

We keep the action simple, the point of this is to see if the params dictionary, which would normally have the payload information from the trigger, will have the additional user defined environment variables. We’re going to define these in the manifest.yaml file (more on that soon), and set them using Travis CI.

This manifest file is an OpenWhisk concept and describes the overall package of functions for this project. It’s here that you specify your runtime (Python, Go, Node, etc), and the file to run.

The part that I will be leveraging is found in the section about handling environment variables.

The gist of our file:

You could, before configuing Travis, pause here and deploy the action manually by first exporting a few environment variables:

and then by running ibmcloud fn deploy while pointing to the manifest.

You should see a new Python based action in your function overview, and clicking it should show you have two parameters defined. That’s all well and good but it doesn’t give us any CI/CD, so delete it if you created it.

Now to the critical part of this tutorial. Using Travis CI to re-deploy our app. How are we going to do this?

We’re going to do the same thing we did locally, that’s how!

This is how a minimal .travis.yml file looks like (with some extra linting using flake8), the bulk of the logic is done in deploy.sh, defined just below.

The first thing we have to do it set the environment variables that Travis CI needs. The IBM_CLOUD_* prefixed variables are needed by travis.yml (viz-a-via the deploy.sh script). I’ve allowed some of these to be visible, but your values will likely be different.

The GHE_TOKEN and PUBLIC_GH_TOKEN variables are defined here because they’ll be available to the shell, and called in the OpenWhisk manifest.yml deployment file.

Now let’s actually run it all together by pushing a nominal change to the repo, add a README.md for instance, then look at the Travis CI logs.

NOTE I’ve split the logs into sections so I can talk about each one, but the log itself from Travis CI will appear as one long block of text.

The output of the ibmcloud plugin install cloud-functions command.

The output of the ibmcloud fn deploy --manifest manifest.yml command.

The last step is to go back to the Functions console on IBM Cloud to verify everything is deployed.

Just like when the action was deployed manually, the action is listed, our simple action is shown, and the parameters were relayed from Travis CI to OpenWhisk.

Hope you enjoyed reading this tutorial as much as I enjoyed writing it. I hope you can re-use it for your own organizational workflow.